“After the industrial age had passed there was a wonderland of mischief in its ruins. A brownfield of
possibilities built on left-over fragments waiting for a predictably boring future to arrive. A
temporary crack in the fabric of the city through which it was possible to catch a glimpse of as yet
unrealised communities and spaces. A place in which it was possible to see past the glossy steel-and-
glass dreams that fill architectural renderings and shape municipal imaginations. Peer into a
makeshift wonderland pregnant with muddy dreams of a messy and unregulated future.

Because the original functions of this Brownfield Wonderland had been lost in time, it was full of
indeterminate possibilities and the dreams of those whose desires are not valued. It was an
imaginary wonderland of mud that refused to remain settled or become sensible. It was a
hypothetical brownfield filled with potential cities we could have built and lives we could have led. If
only we had grasped these ghostly dreams of alterity and make them into material and social
structures.

But even as a haunting memory it holds the promise of roads not taken and a glimpse of that vast
undefined space of possibilities that exists outside of the constraints of a contemporary city that is
coming into view where it once lay. An unassimilated and unrealised municipality that might very
well rise again. Once the structures imagined by bureaucracy and built by the lowest bidder escape
their current use and the site becomes once again a Brownfield Wonderland.”

Kristoffer Ørum's Brownfield Wonderland is a multi-platform art project at Spanien 19C in Aarhus, Denmark. It takes the current development of the site of the art space as its point of departure, arguing for the often-
overlooked qualities and potential of brownfield sites like it. The project consists of 3d printed
copies of fragments from the construction site surrounding the art space and text written with mud
from the site as well as a downloadable Augmented Reality App where one can build one&#39;s own
imaginary and weightless architecture.

The 3d printed copies of fragments from the construction site have become a sort of digital “ghosts”.
They have been 3d scanned, using the kind of technology one might find in one&#39;s smartphone, and
subsequently 3d printed in monochrome versions using a variety of materials ranging from
terracotta to granite. In their new form they remain recognisable both as having been a part of
structures that no longer exist and as potential building blocks for future structures. These hollow
approximations of the original fragments are half-remembered memories made tangible. Hollow but
convincing memories of the potential of what was before, not unlike 3d architectural renderings
whose apparent realism hides the hollow and malleable nature of 3d graphics.

As one deciphers mud from the ground that has been smeared onto the wall in the shape of
geometric letterforms, dust from the building site made up of particles that were once buildings
enters one&#39;s lungs. The mud text is a site-specific text that has been made from the place where it
has been written, even as it attempts to reimagine and remember this very place. The physical mud
and the immateriality of the language it carries link imagined futures and pasts to the ongoing and
tangible process of physical change happing right now at Spanien 19C, promising that things we take
for given can be taken apart and put together in as yet unimagined ways.

The Downloadable Augmented Reality App (available from November 11th here: https://s.oerum.org/BW) allows one to build one&#39;s own messy and unregulated digital architectures, both on and off the building site
around Spanien 19C. On the screen of a phone or tablet, one can arrange a combination of
scaffolding, 3d scans from the site and architectural fragments into an unstable and intangible
building mass. The app affords a glimpse of a city that flaunts its weightless hollow nature instead of

hiding it, superimposing upon the physical reality of the building site the temporary digital ghost of a
wonderland built on the messy and indeterminate qualities of the brownfield. A ghostly city that is
no less real than the cities summoned forth in digital renderings by architects and planners to
convince us of the future they are proposing. However, this an unsanctioned and unrealistic version
of what could exist, made plausible but the authority of technology, not the dreams of bureaucracy.

Background:
The artist-run space Spanien 19c used to be located in a messy and unregulated, but fairly central,
part of the increasingly gentrified city of Aarhus. Until redevelopment started a few years ago, the
area had somehow managed to escaped both commercial and municipal interest. However,
following decades of “misuse”, the area is presently being integrated back into the rest of the city as
a productive and commercially viable new part of town called “art city”.

As the new neighbourhood emerges, the original post-industrial brownfield site is being broken
down into its constituent parts and made into something new, with a few token fragments of its
industrial history left as reminders of the qualities that it used to hold. Just as the industrial buildings
were once repurposed by artists and others in search of imaginaries that the rest of the city did not
offer, today this liminal area and its activities are being refashioned in the image of the surrounding
city, according to municipal imaginaries. During this struggle of imaginaries Spanien 19C continues to
function as an art space, wedged in between building sites of what is to come and fragments of what
used to be.

It is in this indeterminate time and space the Brownfield Wonderland exists as it attempts to
reimagine the post-industrial brownfield. An urban planning term for any previously developed land
that is not currently in use. The project puts forth an idea of the brownfield not as a void that needs
filling, or something useless that needs a new function, but as a wonderland that is already full of
qualities and things that could not exist elsewhere, thus realising that in the “useless” ruins of a past
lies many other possible futures, not just the one that is being constructed at the moment.
At the moment the building site is a site of overlapping and contested imaginaries and Brownfield
Wonderland is a celebration of this brief moment where two ideas of what a city is coexist. It is
based on the belief that there is no inevitability to the current process of gentrification, it is simply
one choice taken out of a million other possible ways we could develop our cities. While
gentrification night favour one imagined future out of all the others that could have come about, the
ongoing struggle of whose imaginaries will be realised, and whose will be kept as potential or
unrealistic futures, remains. This Brownfield Wonderland might very well appear once again when
this project is long forgotten, and current norms of what is useful and productive are forgotten.
Leaving the site once again ready to become yet another kind of Brownfield Wonderland, where one
might just be able to dream of something new, instead of more of the same.

Get ready to build your own messy and unregulated digital architectures, both on and off the
building site around the site of Artist run space Spanien 19C in Copenhagen, Aarhus. On the screen
of any compatible phone or tablet, you can arrange a combination of scaffolding, 3d scans from the
site and architectural fragments into an unstable and intangible building mass. Brownfield
Wonderland affords a glimpse of a city that flaunts its weightless hollow nature instead of hiding it,

superimposing upon the physical reality of the building site the temporary digital ghost of a
wonderland built on the messy and indeterminate qualities of the brownfield. 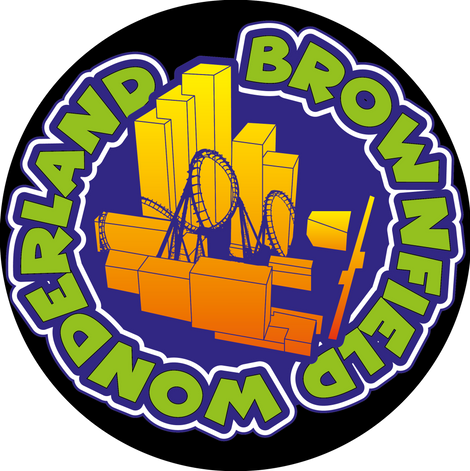 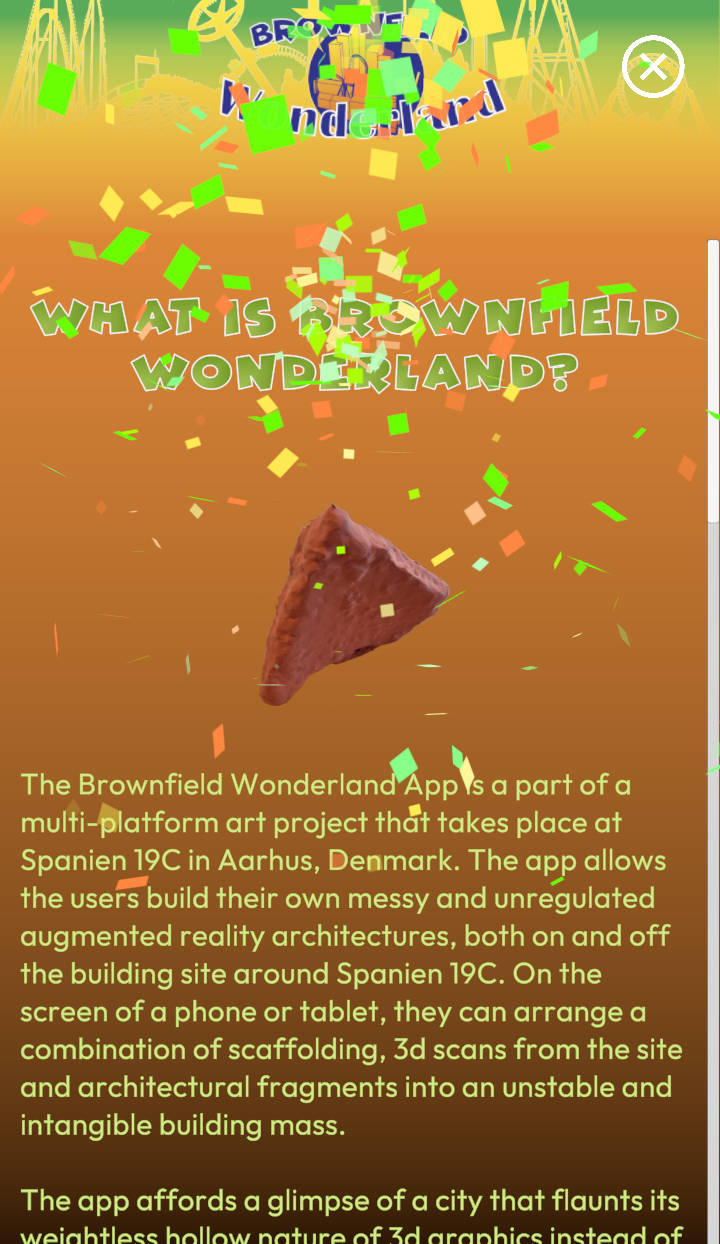 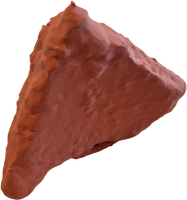